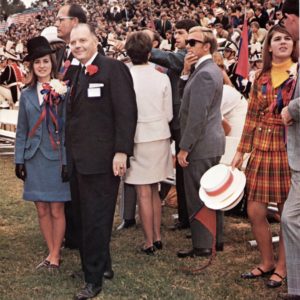 Opened in 1968 at a capacity of 23,000, Joe Aillet Stadium – which wasn’t given its current name until Nov. 11, 1972, when it was dedicated in honor of the former Tech coaching legend – has proven instrumental in some of the biggest wins in the program’s 100-plus year history.

The facility was upgraded in 1985 when a luxury sky box was added to the press box and again in 1989, when an additional 7,600 seats were added, increasing the seating capacity to 30,600.

A brand new, state-of-the-art videoboard was installed in the north end zone in time for the 2009 season, a $2 million addition to the facility. Built by Daktronics, the national leader in scoreboard and videoboard manufacturers, it is 25 feet x 45 feet and can show one display or be split into multiple replays. In addition, the south end zone received a brand new LED scoreboard that all fans can easily see during the day or at night.

Construction on a new South End Zone facility began as ground was formally broken during the T-Day Spring Game in 2014. The removal of two sections of stands dropped the capacity to 27,717 for the 2014 season with capacity set to rise to 28,019 with the addition of 300 seats in a premium club section opening in time for the 2015 season. With the addition of the new $18-plus million press box and luxury suites facility, the capacity of Joe Aillet Stadium has once again increased to 28,562. 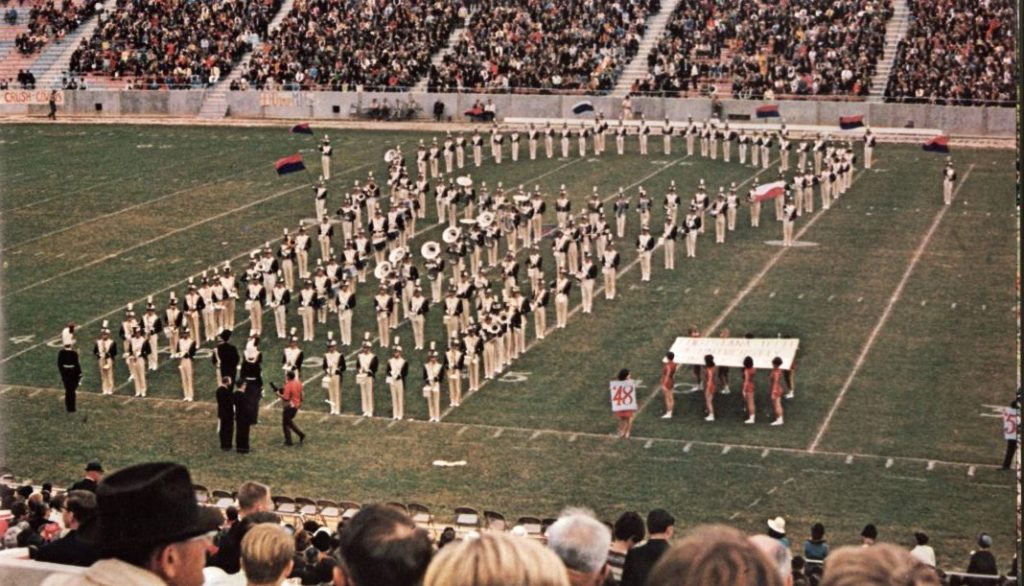 As a tribute to the tremendous contributions of the Davison family, Louisiana Tech President Les Guice and Athletics Director Tommy McClelland announced on June 25, 2015 that the University would name the new south end zone facility at Joe Aillet Stadium in honor of the Davison family. The Davison Athletics Complex is home to the Bulldog football program as the $20 million-plus facility encloses the south end of the stadium.

The stadium’s namesake – Joe Aillet is a member of the Louisiana Tech Athletics Hall of Fame and the National Football Foundation College Football Hall of Fame – guided his Tech teams to a 151-86-8 record and nine conference championships from 1940-1966. The winning tradition Aillet established during his days of coaching at Louisiana Tech has continued as the Bulldogs have posted 10 perfect seasons in the facility’s history.

From the first game ever played in the stadium, a 35-7 win over East Carolina on Sept. 28, 1968, to a 22-14 victory over SEC foe Mississippi State in 2008, Joe Aillet Stadium has been the site of some of the most magical moments in Louisiana Tech football history.

Joe Aillet Stadium has proven to be a tough place for opposing teams to play for more than four decades. During the course of the stadium’s history, Tech has dominated opponents as the 155-66-2 record indicates a winning percentage of more than 70 percent. Since Tech moved up to Division I-A in 1989, the Bulldogs have registered a mark of 93-39 at Joe Aillet Stadium.

In that inaugural game against East Carolina at Joe Aillet Stadium, a young quarterback named Terry Bradshaw guided the Bulldogs to the victory as Tech fullback Buster Herren scored the first touchdown ever at the stadium on a two-yard run with 6:20 remaining in the second quarter. It was just the first of many memorable moments for Tech fans in Ruston.

On two different occasions over the past 50 years, Tech has registered streaks of 18 straight wins at Joe Aillet Stadium.

The first such streak started with a 23-0 win over UL-Monroe in the final game of the 1971 season and ended with a 49-20 win over Tennessee-Chattanooga in the fifth game of the 1975 season. That run by coach Maxie Lambright’s teams included two small college and one Division II national championship seasons.

During the late ‘80s and early ‘90s, the Bulldogs won their first 18 home games after joining the Division I-A ranks. Tech defeated Northern Illinois 42-21 in the first home game of the 1989 season to begin the streak with the last of the 18 wins being a 17-16 victory over Northern Illinois in 1993.

Included in that string of wins was a 31-30 victory over Colorado State on Nov. 17, 1990, that catapulted the Bulldogs into the 1990 Independence Bowl. Tech trailed 30-14 late in the third quarter before scoring 17 unanswered points, capped by Gene Johnson’s 16-yard touchdown pass to Bobby Slaughter with 2:14 to play. The Bulldog defense held the Rams to four and out on their final possession as a wild celebration ensued, which ultimately ended in the goal posts in the south end zone being torn down by Tech fans.

One of the biggest individual matchups in the stadium’s history came on Sept. 5, 1998, when two future NFL quarterbacks squared off as Central Florida’s Daunte Culpepper led his team to a 64-30 win over Tech’s Tim Rattay and the Bulldogs. Culpepper passed for 370 yards and four scores while rushing for 69 yards and two more touchdowns while Rattay passed for 524 yards and three touchdowns.

The 2000 season saw a milestone reached at Joe Aillet Stadium as the Bulldogs under head coach Jack Bicknell recorded the 100th win in the facility’s history. True freshman quarterback Luke McCown tied an NCAA Division I freshman record by tossing six touchdowns in the milestone 48-14 victory over UL-Lafayette on Oct. 14, 2000.

Joe Aillet Stadium hosted its first nationally televised game on Dec. 5, 2002, when ESPN came to town to produce Louisiana Tech’s game against Fresno State. Although Tech fell in the contest, it was another milestone for the program and the facility it has called home.

The 2004 season opened with another nationally televised home game, as the Bulldogs defeated Nevada 38-21 Sept. 6 on ESPN2. This was just a preview of things to come during the season at Joe Aillet Stadium.

Less than one month later, Tech fans were able to witness one of the greatest games in Joe Aillet Stadium history, as Louisiana Tech downed No. 17 Fresno State 28-21 on Oct. 2. Tech trailed 13-0 early in the second quarter before running back Ryan Moats and the Bulldog defense turned up their level of play. Moats rushed for 236 yards and four scores, including the game-winner with just under four minutes to play, which was set up by an interception deep in Fresno State territory.

The win was sealed when current Green Bay Packers star Tramon Williams intercepted Paul Pinegar with less than :30 remaining, starting a wild celebration that saw the goal posts in both end zones torn down.

The 2011 season saw disappointing lows early on but a championship finish. After leading Houston 34-7 with 20 minutes to play, Tech dropped a heartbreaking 35-34 decision to the Cougars but ended the year with seven straight wins, including two at home, as the Bulldogs clinched the 2011 WAC Championship with a 44-0 rout of New Mexico State in a driving rainstorm in late November.

These games and many more are what have made Tech fans the real winners over the years.

As the warm fall evenings approach and another year of Bulldog football begins, Joe Aillet Stadium will once again host some of the best college football the nation has to offer.