A young but experienced bunch of pups 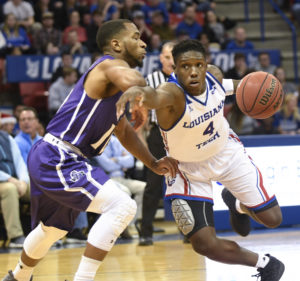 In his third year as the head coach of the Dunkin’ Dogs, Eric Konkol went into the 2017-18 season with his deepest roster yet.

The Bulldogs won their first five games of the season, including the Cancun Challenge championship in Mexico with a dramatic 63-61 win over Evansville in the title game.

Unfortunately, Mexico was not as far south as Tech’s season would go.

Junior college transfer Harrison Curry, who had the potential to be the heir apparent to Erik McCree — he led Tech in scoring in 2016-17 and spent time in the NBA with the Utah Jazz during the winter — played only six minutes the entire year because of a knee issue.

Jalen Harris, the team’s leading scorer the first month of the season, transferred in mid-December. Less than two weeks later, starting point guard and reigning C-USA Freshman of the Year DaQuan “DayDay” Bracey injured his back and played sparingly during conference play.

Then in the first week of February, 7-footer Joniah White, a crowd and coach and teammate favorite, retired from playing because of a medical problem concerning his heart.

Despite it all, the Bulldogs cobbled together a 17-win season.

The challenge was in consistency. With all the changes in the roster, the Bulldogs worked to find their way, mainly on defense. One of the team’s finest defensive efforts came in the season-ending conference tournament, a nail-biting 62-58 loss to Old Dominion.

The silver lining in the sputtering season was that Tech’s underclassmen got much more playing time than they otherwise would have. As a result of the roster depreciation, the four freshmen – Amorie Archibald, Anthony Duruji, Exavian Christon and JaColby Pemberton – got opportunities to grow and played with more and more confidence as the season wore on. They’ll be sophomores this season, but with the game experience of most juniors.

They will take that experience and rely on it heavily going into the 2018-19 season. The Dunkin’ Dogs need the veteran leadership of a healthy DayDay (fingers crossed), an ever-improving forward Oliver Powell, and the lone senior, Derric Jean, who brings with him 98 games of Bulldog Basketball knowledge.

A trio of junior college transfers will be expected to contribute early and often. Shooting guard Ra’Shawn Langston, a 6-3 JUCO All-American at Connors State in Warner, Okla., will be joined by 6-9, 245-pound Armstrong Ojunkwu (San Diego Mesa) and 6-2, 225-pound Mubarak “Mo” Muhammed (Bossier Parish Community College); Tech desperately needs the size of Ojunkwu and Muhammed to match the league’s big-body guys under the basket.

It will be the second straight year with just one senior on the roster, so chemistry will need to be developed yet again with the roster turnover. In the age of the three-pointer, the Bulldogs will also need to replace one of the greatest shooters in program history, Jacobi Boykins.

All that equals up to a lot of challenges but also a lot of opportunity. This should be a fun team to watch.