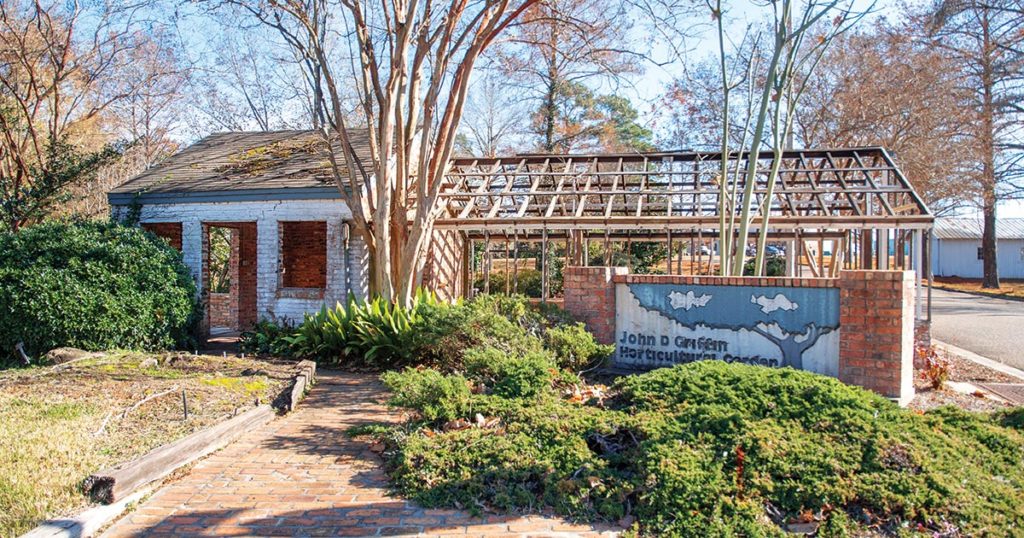 The main structures in the John D. Griffin Horticultural Garden on South Campus will have their roofs renovated, a step toward offering a safer and more beautiful public space for the community – courtesy of a grant from the Lagniappe Ladies philanthropy network.

Directly behind Reese Hall sits a small, rustic, brick structure that was previously used as the Tech Farm salesroom, and connected to it is an old greenhouse where plants were once sold. In recent years, these structures have not been suitable for use, in part because of their hazardous nature. The roof of the salesroom had a hole in it, along with growing moss on its shingles, and the plastic roof that previously covered the greenhouse was recently taken down because of mold.

The Lagniappe Ladies recently awarded Dr. Paul Jackson, an associate professor in the School of Agricultural Sciences and Forestry, with the financial resources to update the roof of the old salesroom, the greenhouse, and the garden’s tool shed. The updates were completed in January.

The old salesroom is a historical structure on campus. People who have lived in Ruston a long time probably remember it as the original salesroom, and maintaining these structures keeps the community more united with the past.

After making sure the area is safe for regular use and high traffic, Jackson plans on adding picnic tables around the greenhouse. While the greenhouse walls will continue to allow ample airflow, Jackson wants to add a lattice effect, or something similar, to further revamp the structure.

The garden is regularly visited by members of the community, and Jackson has noticed the structures serving as a backdrop for photo shoots, a picnic space, and a rest stop during neighborhood excursions. He hopes improving the safety and appeal of the space will encourage more people to use it.

“It will be a place to study, rest, and reflect,” Jackson said. “Because of its proximity to South Campus, students and faculty who are there already will use it primarily, but everyone will be welcome.”

Throughout the past several years, Jackson has made several efforts to enhance the appearance of South Campus by guiding his students through multiple landscaping projects. He gives them the opportunity to plan and redesign the spaces and teaches them the proper way to dig holes, plant, and prune while simultaneously elevating their learning environment.

“They call it free labor,” he said, “but I call it hands-on experience.”

In the new year, Jackson and his students will continue to transform the John D. Griffin Horticultural Garden. Now they’ll have additional structures to support their learning as well as their leisure, thanks to the Lagniappe Ladies.