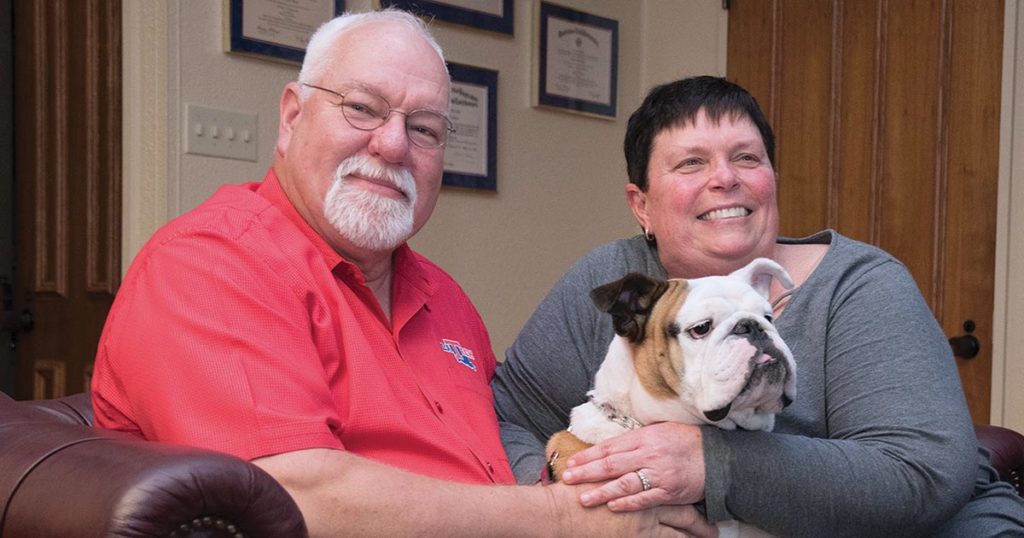 You can’t get much more Louisiana Tech than Cathi Cox-Boniol. Cathi is a dedicated member of the Tech Family. She is always available to assist the University, and one example of her commitment was to the 125th Anniversary Celebration Committee.

She grew up in Ruston and has invested in the community, especially its schools, since graduating from Tech in the early 1980s. Mom and dad and little brother Billy all graduated from Tech. She’s got two degrees, plus her Graduate +30 and a Specialist degree. Her dad, Bill, was Tech’s 2014 Alumnus of the Year.

When you see the school’s yearbook, she sees a primer.

“My parents read the Lagniappe to me,” she said, straight-faced, which she seldom is. “Might be how I first learned to read. You think I’m joking, but I’m not.”

She’s not, and if you know her and her family, you’re certain she’s not. Cox-Boniol is as Tech as a Noble Tree in the Quad, as the State-and-T on a Bulldog helmet, as Howard Auditorium and Keeny Hall.

Asked to serve on the 125th Anniversary Celebration planning committee, she said yes, as she always has to her alma mater.

And already, she’s gotten more back than she’s invested, which is substantial.

“For the younger people on the committee, a lot of what we’ve done has been informative; they didn’t know a lot of things that have always been part of my life and memories,” she said. “It was all new to them. And still for me, someone who’s been immersed in it all my life, this experience has been like a rebirth.”

The Alma Mater sounds different to me now. For some reason it’s resonating with me and I see myself standing at my mother’s knee singing the Alma Mater with her. None of this is new, but it feels different. I feel reborn.

It’s the feeling Cox-Boniol and the committee are hoping alums and families and friends have — and take away — due to all that’s possible come Celebration Weekend, April 24-26.

This tiny group then expanded — some would say exploded — to include young alumni from different locations, voices from every corner of campus, representatives from both the City of Ruston and the Lincoln-Parish Convention & Visitors Bureau, and others like Cox-Boniol whose families have deep ties to the school.

The plan was to promote and to load up on activities that would offer intimacy and togetherness, free time, and can’t-miss events.

“While some activities might intersect, we wanted the different pockets — say theater or sororities or lettermen — to customize,” she said. “That’s reflective of the tapestry that is the Tech Family.

“It’s three full days, but it’s not overwhelming,” she said. “We want people to experience as much as they can.”