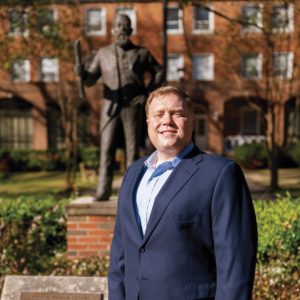 Planning Committee Member Lomax Napper grew up in Ruston. He earned his MBA from Louisiana Tech in 2001 and his MA in Education in 2002. His first name is the same as one of the men whose support pre-dated the University’s founding, and he’s a member of the family for which the Marbury Alumni Center is named. As a dedicated member of the Tech Family, his ties to the University could not be much deeper or stronger. One example of his commitment was to the 125th Anniversary Celebration Committee.

What are your first memories of Tech?

Football and basketball games; we attended both the men and women’s games. We actually were a host family for some of the Lady Techsters. (Louisiana Tech Athletics Hall of Famer) Pam Gant was our foster Lady Techster. Pam, Janice Lawrence, and occasionally Debra Rodman came over to our house for dinner, and we would play games.

It might take a minute, but explain your family’s history with the University?

Why do you think your grandparents were so invested in the University? Have you and your family ever talked about it?

As I mentioned, my family has ties to the beginning of Tech here in Ruston. I think that type of commitment is something that is passed down from generation to generation. I think their investment in Tech came out of the passion instilled in them by their parents and grandparents. I think they saw and realized the economic impact that Tech would have on this community. My grandfather (William Marbury Jr.) saw what could be the direct financial impact Tech has on families within this community and what an economic benefit Tech could bring to this community and beyond. They knew that Ruston’s ability to thrive is impacted by Tech, the workforce created by the graduates of Tech, and the innovation springing forth from Tech.

What has the experience of planning this 125th Anniversary Celebration been like for you?

It has been an honor to be involved in the planning of this. First and foremost, the staff of the Marbury Alumni Center do a fantastic job. All the Tech staff involved have been incredible. History behind the people on the committee is awesome. We have prominent Tech alums representing several eras. The knowledge, love, and care all of them have for Tech is displayed every time we are together. I just sit back sometimes and feel lucky to be included with such people.

I have learned so much about the history of Tech. I have learned about people and heard stories that I was not familiar with, which is awesome. I have tried to help the fellow planners by being active on the committee and contributing ideas when I can. I did host all of the past Alumni Association and University Foundation board presidents on Sept. 6, 2019, the night before the Grambling football game. It was an honor getting a group of such influential Tech alumni together.

When was Camdyn’s first game at Tech and has he ever asked why his great granddad’s portrait is in the Marbury Center? And why the building is called that?

Anything else you want to add?

My paternal grandfather, James “Harold” Napper, also graduated from Tech, as did my great uncle Buddy Napper. My uncle Marshall Napper played baseball for Tech and was on the Southland Conference championship teams in 1974 or 1975. My uncle Jimmy Napper played basketball at Tech. My cousins Travis and Cole Napper are Tech graduates as well as avid Tech fans.

All families I’ve mentioned have been involved in and support Louisiana Tech with much love and pride.