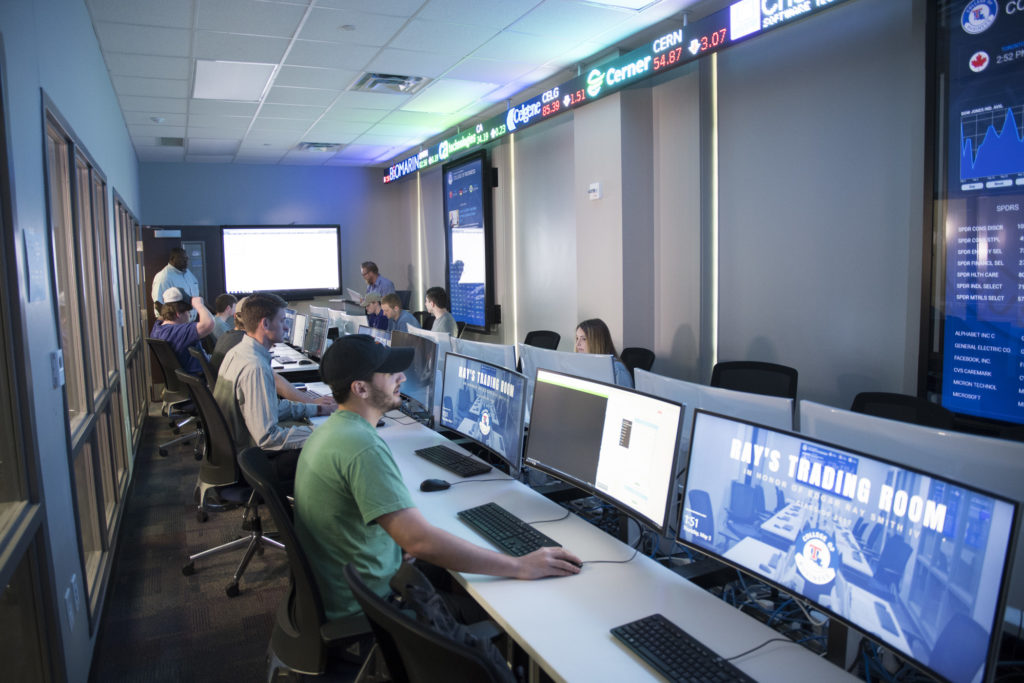 Whether or not bitcoin becomes common or even mildly understood in north Louisiana remains to be seen. The cryptocurrency isn’t being used on campus with anything nearing regularity, but the intellectual side of this infant worldwide payment system is helping educate Louisiana Tech students.

“This is a perfect example,” Tech’s JPI Investments Endowed Professor of Finance Bill McCumber said, “of when technology and finance come together.”

Bitcoin is a peer-to-peer electronic cash system introduced anonymously on the Internet in 2008; the bitcoin network began in 2009 when the first ever block on the network chain – a “blockchain”— was “mined.”

A blockchain is a public ledger that records bitcoin transactions, a sequence of blocks that hold data.

It’s “cool” because this is the main lure of bitcoin: it’s practically impossible to hack.

“We’re sitting together in Fenway Park with 40,000 fans,” Ellis said. “I owe five bucks to the guy next to me who just bought me a bottle of water and a hotdog — it would be more than five bucks these days! — but this is just an example. He has bitcoin and I do too. So on my phone, I pay him from my bitcoin wallet. It updates in my blockchain and in his. But it updates in hundreds of thousands of other bitcoin wallets too.

“Everything everywhere is recalculated. Hundreds of thousands of servers are doing these recalculations. This keeps people from hacking in and trying to steal money. It’s virtually unhackable, which is probably the top reason people use it.”

Instructive to note is that bitcoin is hot because of the highly applicable blockchain technology — and a bit because of novelty. Although consumers can have bitcoin wallets, there are a number of new applications (phone apps) that make it practical to pay other people directly — like at the ballpark — but in U.S. dollars, again making bitcoin a less attractive alternative.

Another “problem” with bitcoin is that it’s not backed by anything. Currency is backed by something: for instance, the American dollar is backed by America’s word. That’s it. But that is substantial.

“It’s the same with the currency in other countries,” McCumber said. “The difference between a sovereign currency — the Euro, the English pound, the Japanese Yen — and a cryptocurrency is really no more than the ‘faith’ in the issuer, which is then reflected in the stability of currency as it’s traded millions of times each day by institutional investors and governments. Bitcoin is down 70 percent from its high of just a few months ago — so it’s extremely volatile — precisely because traders are not currency hedgers but, in the case of bitcoin, pure speculators.”

Crypto currency is backed by…nothing. There is no FDIC or Lloyd’s of London insuring it. No Security Exchange Commission is regulating it.

But whether Rustonites with ‘bitcoin wallets’ becomes the norm or not, the relatively new technology is still helpful as an educational tool.

In Ray’s Trading Room in Tech’s College of Business, students can virtually buy and sell bitcoin as they would any other financial asset. “Students learn to be professional analysts and investment managers,” McCumber said. “Fundamental and macro analysis, and the skills used to trade on such information, are transferable across industries, and well beyond Wall Street.”

Tech at present has no students who are working for or have jobs lined up or internships with companies whose main work is cryptocurrency, which is “kind of a fad right now,” McCumber said, but the technology central to operating in the “cryptosphere” is something students are prepared to work on.

“Blockchain technology is applicable in all kinds of technology,” he said. “Plus, anybody with the right computer can set up a ‘trading farm’ and get paid that way; a simple way of saying it is that people would pay you to use your server to process their transactions.”